I’ve been meaning to watch and review Eric Bischoff: Sports Entertainment’s Most Controversial Figure since the Blu-Ray arrived on the WWE documentary’s release date (gotta love Amazon Prime), last Tuesday, 6/7. But a combination of discovering Lucha Underground is available on on iTunes and just knowing that the Bischoff doc wasn’t going to be anything special, so I’ve been procrastinating.

Lucha Underground is a lot of fun. It’s a completely fresh presentation and I’ve been hooked on it, having resisted the internet hype for as long as I could.

As for the Bischoff DVD, it was pretty much what I expected.

This is a story that has been told plenty of times, and if you watched Raw and Nitro go head-to-head in the Monday Night Wars, or watched the WWE DVD or Network series of the same name, or The Rise and Fall of WCW DVD, or read Bischoff’s book Controversy Creates Cash, you know the Eric Bischoff story.

However, that doesn’t make his story less interesting. From moving around as a kid from Detroit to Pittsburgh to Minnesota and all the different jobs and business ventures he was in, his path to becoming one of the most influential decision makers in the history of wrestling is certainly a tale worth telling.

Bischoff was a high school wrestler then started his own landscaping company with a friend, which became successful to the point that Eric got tired of it and sold his part of the business to his partner. After that he pursued and earned his black belt and fought in karate tournaments, before giving that up to get into sales. He was into modeling for a bit, and met his wife, Loree, at a modeling gig.

His first contact with the wrestling business came when he and Sonny Onoo, a friend he’d met as a touring martial artist, was trying to develop and sell a ninja star throwing game for kids. Bischoff had the idea to try and advertise with Verne Gagne’s AWA. He eventually got a job with AWA, selling AWA’s syndication to different markets around the country. He got into production after that, then promoted shows, and eventually become an on-air commentator because someone didn’t show up to TV one day.

Bischoff’s now-famous “sell me that broom” audition tape was shown, and Bischoff talked about Gagne not being able to keep AWA financially viable, and trying out for WWF a year before getting a job with WCW.

From here, the Bischoff story becomes exactly the one you’ve heard over and over. He was a fourth string announcer, and saw all the company’s problems from the inside, landed an interview for the executive producer job, got it, and started the turnaround of WCW that eventually lead them to topple (temporarily) WWF and Monday Night Raw.

There were some interesting quotes from former WCW stars. Kevin Nash said about his first stint in WCW when Bischoff was still an announcer, “(Bischoff) sat there and told me he was gonna take that company over.” Nash had been dismissive and was sure when he left for WWF that WCW wouldn’t exist in two years.  Diamond Dallas Page said “Bischoff changed the world with Nitro.” Which may have been a little hyperbolic, but there’s no denying how popular professional wrestling became when Nitro went head-to-head with Raw, and how much the business end of World Championship Wrestling turned around with Bischoff at the helm.

I’ve heard Bischoff speak about how he wanted to tell stories and be different from WWF before, but I’d heard him use the SARSA acronym to describe his booking philosophy: Story, Anticipation, Reality, Surprise, Action.

Bischoff ran through the SARSA elements of the NWO storyline. The blu-ray extras include a section titled “Stories” which are just expanded interview portions of the documentary’s subjects. Many of them are about his love of hunting and horseback riding and things I have no interest in, but one in particular, “Believability” was especially germane to a lot of the discussions about pro wrestling today.

Verne Gagne wouldn’t expose the business to Bischoff for years, even once he’d become an on-screen personality. Bischoff acknowledges it must be difficult today with the internet, but believability and reality are what make great wrestling angles. The magic of pro wrestling is in the mystery and if you don’t think the performers are acting, the audience will have a much easier time suspending their disbelief.

Bischoff recognizes part of the problems in WCW was his dependence on improvisation, but makes the case that improv/lack of scripting is also what made WCW a believable and cool product.

I’d say the biggest surprise was finding out that Bischoff’s long-time business partner, Jason Hervey, was Wayne Arnold, Fred Savage’s older brother on The Wonder Years. I’ve read the sentence “Eric Bischoff and his business partner Jason Hervey” a hundred times, and never once did I read a mention of his acting career.

The format of the documentary itself helped keep a story I’ve heard before interesting. All of Bischoff’s footage is new, shot around him doing different outdoorsy activities in Cody, Wyoming. Fishing, riding his motorcycle and horses, hiking with his dog. Seeing his life now, and the way he is able to talk about things that happened twenty years ago gave everything a very reflective feel. After this much time, Bischoff offers the perspective of somebody who lived it, and also isn’t too close anymore.

He does dispute certain narratives, most vehemently the claim, made by Gene Overland in a clip played for Bischoff to react to, that he was handing out creative control to all the stars in WCW. Bischoff denied this, saying Hulk Hogan was the only WCW wrestler with contractual creative control. Bischoff conceded Nash, Scott Hall and Bill Goldberg had contracts stipulating things like “creative consultations” but no guarantees of creative control. In the extended conversation in the extras, Bischoff challenged anyone to show him a WCW contract other than Hogan’s with complete control over their television character written in.

The most disappointing aspect was that the end of WCW was completely glossed over. Bischoff talked about leaving/being fired, and then being asked to come back and realizing the company was in worse shape and more chaotic than when he left originally. While he’s speaking about how bad WCW had become in his absence, a three second clip of Bischoff and Vince Russo on Nitro played as B-roll. That was it. No other mention of Russo was made, which seemed odd, because I thought a WWE produced release would have at least taken the opportunity to, if nothing else, rip Vince Russo. But instead, complete silence.

Another expected but still a little funny whitewashing was Bischoff talking about his WWE “firing” and being thrown in the garbage truck by Vince McMahon and being written off of WWE television. “I thought it was the perfect end to my career.” Bischoff talked about being out of the wrestling business after that, and how that garbage truck ride was kind of his ride in to the sunset as he then went on to other ventures outside of wrestling.

I never expected TNA to be mentioned, but to intentionally allude that Bischoff hasn’t been in the wrestling business since he left WWE is just one of those things that make people say you can’t believe a single thing WWE ever says.

This review is getting a little long, and there’s probably too much summary, but I think it’s important. Bischoff has some interesting things to say about Vince McMahon, and his first conversation with him about coming in to WWE.

Bischoff also talks about finally getting to tell his side of the story, truthfully, without some other agenda. I felt like he was alluding to the Monday Night Wars and Rise & Fall DVDs and how he was doing those interviews partially in character, and WWE was putting them out partially to bury WCW.

He mentioned his interview on the Network with JBL, and that being the first time he could ever get his side of the story out, and he appreciated being able to reflect like that. 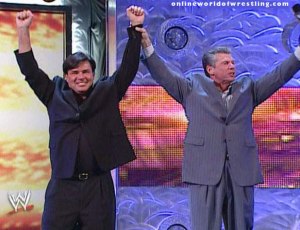 Bischoff’s most engaging comments came near the end, reflecting on the end of WCW. Looking at it knowing how the Monday Night Wars and WCW ended, Bischoff said he’s “thrilled it turned out the way it did.” He talked about Vince’s commitment to the industry and how nobody with AOL-Time Warner wanted wrestling on their networks and wouldn’t have put in the effort to make WCW the power that WWE is today. “(The war) turned out exactly the way it should have… I’m glad because had it been different we wouldn’t be sitting here right now.”

It was also interesting to hear guys like Chris Jericho and Steve Austin talk about how much their relationship with Bischoff has changed. Dusty Rhodes appeared in a few clips from 2009, and it was just cool seeing him on my television again.

Bischoff also got some decent advertising for his brewery and their first beer, Buffalo Bill Cody Beer, named for his home in Cody, Wyoming.

Overall, Eric Bischoff: Sports Entertainment’s Most Entertaining Figure was a fine way to spend a couple of hours, but don’t expect anything new to be brought to the table in this WWE release. It is absolutely the retelling of a story you’ve heard before. The footage of Bischoff living his life in Wyoming now gave some freshness to a documentary that probably could have been put together entirely out of archived footage.

A slew of Bischoff’s most famous segments from WCW and WWE are featured in the extras, with the entire second disc dedicated to highlights of his on-screen career.