WHAT SUCKS ABOUT WWE RIGHT NOW

The WWE has one big problem. I stated as much in Everything I Like About WWE Right Now earlier this week. This is by no means an original thought, as […]

The WWE has one big problem. I stated as much in Everything I Like About WWE Right Now earlier this week. This is by no means an original thought, as many people believe the creative, the writing of the show, holds the product back from what everybody sees as its potential. There are very few concise, well told stories, let alone exciting, surprising or gripping ones.

In the golden age of television, the era of Game of Thrones and The Walking Dead and Breaking Bad and House of Cards and Mr. Robot and Sons of Anarchy and about a hundred other well written, highly entertaining television programs made over the last decade that audiences have actively chosen over pro wrestling, sports entertainment and the WWE, you can’t run a fiction show without great writing or envelope-pushing ideas.

But the effort or talent or taste of the writing staff, and the show’s formula, are systemic problems. It’s impossible to make a list like the one in Everything I Like because the flaws in the show stem from these areas.

There are minor annoyances. The constant kicking out of finishing moves and the seeming lack of impact that supposed high impact maneuvers have on opponents. The ability of a wrestler to pop right up from a Super Kick or a clothesline that flips him completely upside down and around, and then have the awareness and strength to land a high impact move of their own. 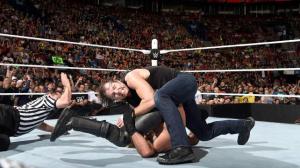 Coupled with that problem is the overuse of roll-ups and surprise pins. Wrestlers can kick out of superplexes and 450-splashes, but an old fashioned roll-up, maybe with a handful of tights, ends half the matches on Raw each week. It’s just nonsensical. But it all goes back to the storytelling. The only way to perpetuate a feud is to have one guy get the advantage on the other only to get beaten by surprise, then there needs to be a rematch. And then they’ll be some 50-50 booking with the opposite decision later on Smackdown or the next week on Raw, and then a rubber match at the pay-per-view.

I’ve written about how I like WWE’s direction, but I get bored with the show when it’s constantly predictable, formulaic to a fault and just plain unremarkable. They don’t even try to swerve the audience anymore. Stories that could be built in a bigger way just get booked flat. Anything with potential never lives up to it. When was the last time a story on WWE television got your interest, held it, and then delivered?

And that’s what sucks about WWE right now. No matter how many “THIS IS AWESOME!” chants I agree with, no matter how many guys from the indies or NXT who get brought up to the main roster who I like, who I’ve seen in the ECW Arena or National Guard Armory and root for on a personal level, they’ll just never be the stars I want them to be because there’s no star-making apparatus.

Maybe John Cena got to the level he’s on because he’s just that big a star, that big a talent. Or maybe it’s in part due to being booked against Kurt Angle and Brock Lesnar and Shawn Michaels and HHH. Guys who were already stars and came up in an era when big stars were pushing each other to make the show as great as it could be.

And I think about what worked in that era, not just the Attitude Era, but even beyond that into the early and mid-2000s, when the wrestlers were still empowered to be themselves, to have their characters come from within. It was the mixture of honesty and intensity that created such great characters. From Stone Cold Steve Austin to Mankind to Edge to CM Punk, guys got over because they were empowered to be their characters.

Characters are so over-scripted now that the least bit of originality and honesty is rewarded by the audience. New Day was dead on arrival when they debuted, but then they grew into the role, and took control and were allowed to be themselves. To have fun. Now three guys who were destined to be buried on the undercard are one of the biggest acts on the show.

The TV-PG stuff really hurts the believability of a lot of the characters as well. I don’t need Sable in a body-paint bikini or Jerry Lawler making constant breast and masturbation references or DX running around yelling “Suck it!” on a weekly basis, but some restrictions are absurd. If Dean Ambrose is supposed to be this anti-corporate, unhinged, out of control combination of Mick Foley, Roddy Piper and Brian Pillman, and then he describes Seth Rollins as “having a stick up his butt,” it’s disingenuous. There isn’t a grown man on the planet who wouldn’t say “ass,” let alone the guy who JBL says can’t be champion because he’d show up to board meetings in dirty tank tops or whose face on a billboard would scare children.

I know McMahon’s default is to direct the show at kids, but I was a kid who grew up in the Attitude Era and I loved it because it was cool. Because it wasn’t children’s programming. It was like watching South Park or Beavis and Butt-head, not Nickelodeon. And that’s when everyone watched. My entire third and fourth grade classes were into wrestling, even some of the girls. My mother is an elementary school teacher. Over the last few years she’s had one, maybe two, wrestling fans in each class. Wrestling isn’t even cool for little kids anymore.

Again, all of WWE’s problems are systemic, and the system really comes down to one man. A man whose vision I admired, and a man who has meant more to the wrestling business than anybody else ever. But it’s clear his direction for the product, at this point, is what is driving down television ratings and casting off fans in droves. When Vince McMahon came on television in 1998 and told the fans he didn’t listen to them, fan favorite Steve Austin was the star of the show and constantly either chasing or wearing the heavyweight championship.

Now when he says the last people he’d ever listen to are the fans, he backs it up, keeping the Roman Reigns charade running or having John Cena derail Kevin Owens’ initial push after debuting him as a major star only to have him lose to Cena on back-to-back PPVs. What if after Lesnar beat The Rock at SummerSlam in 2002 The Rock got his rematch at Unforgiven, won back the title and then took the rubber match by submission at No Mercy? But what happened after Lesnar beat The Rock to become the youngest champ ever? He then went over in a two month feud with The Undertaker. Would Owens have been as big a star as Lesnar? It’s tough to make that comparison, but you can’t make a star if you don’t try.

And that’s what sucks most about the WWE right now: it doesn’t feel like I’m getting an honest effort from the people in charge of writing the show. And if this is the best they can do, then calling them “creative,” even as a title, really is an insult to anybody with an imagination.