ONLY SISTER ABIGAIL CAN SAVE BRAY WYATT

In the year 2017, if you were to take a gander into a professional wrestling dictionary and look up the term “glorified jobber”, you would see a mugshot of Bray […]

In the year 2017, if you were to take a gander into a professional wrestling dictionary and look up the term “glorified jobber”, you would see a mugshot of Bray Wyatt right next to it — and I’m sure guys like Dolph Ziggler and Sami Zayn wouldn’t have an issue in the world with it. Wyatt has been the orchestrator of some of the most interesting and harrowing promos of all time and has had the delivery and execution of a diabolical surgeon with razor sharp scalpels in each hand. Straight up, there isn’t a superstar from here to Japan that can touch Wyatt’s promo game — it’s the work of a pure specialist at the top of his game!

There is one major problem with Bray Wyatt and his perfectly perplexing promos… none of them are true! I’m sure Bray has eaten an ungodly amount of worlds to be the near 300-pound behemoth that he is, but he just can’t seem to dispatch of a mere mortal that’s half his size. The man’s promos come across as if they are supposed to scare us — especially when he tells us to RUN — but that fizzles out real quick once you watch a high school senior lookalike such as Finn Balor beat his ass on numerous occasions. Wyatt is nothing more than a fragile shell of what he could be! At the end of the day he is the largest personality under the WWE banner with the least amount of wins and legitimacy.

Here we have a guy that could be this generation’s “Undertaker” but the big dogs at WWE have decided to break all the rules. Wyatt basically has most of the same tools that Undertaker did — great athleticism for a huge man, a presence that is eerily creepy and can never be “seen” but only “felt”, and a clearly defined character — but that alone can’t get you over and it wasn’t what got Undertaker over.

If you go back to 1990 when the Undertaker debuted and watch through the first five or so years of his career, there was one common thread woven into the fabric of what made him the icon that he matured to be — nobody ever pinned him clean! The only way you hurt him was if you jumped him or issued a beat down with any weapon you could find, and the only way you pinned his shoulders to the mat was if you cheated. Period. End of story.

To put this into perspective: At the 1991 Survivor Series event, exactly one year after he debuted, Undertaker defeated Hulk Hogan for the WWE Championship. Hogan was in his prime and at the top of the WWE food chain, while Undertaker was still a relatively fresh face and getting a major push by defeating Hogan that early in his run. WWE booked the championship rematch between Hogan and Taker to take place one week later at the This Tuesday in Texas event. The Hulkster was able to recapture the gold from Taker but the more pertinent point here is the way he did it. I’m sure Hulk would’ve loved to have been able to hit the big boot and drop the leg for the 1-2-3, but that just wouldn’t have made sense. Instead, it took an accidental chair shot to Taker’s skull from Ric Flair, followed by an accidental urn shot to the head by Paul Bearer. Even that wasn’t enough to take down Undertaker as the Hulkster himself had to resort to heel tactics by throwing ashes from the urn into Undertaker’s eyes before snatching the sneaky roll-up pin for the win! Confusingly, it only takes one jumping foot stomp from little Finn Balor to the “God”, the “Eater of Worlds”, and it’s light’s out. See the problem here? 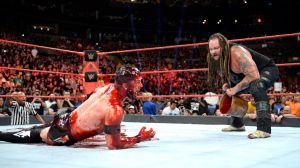 Since WWE has clearly thrown away the Undertaker blueprint there is only one saving grace for Bray Wyatt, and that is Sister Abigail. The one piece to the Wyatt puzzle that is still above ground is the mystery of Sister Abigail. The slate can be wiped clean with the emergence of this sinister sister. The creative envelope has been blown wide open for a seriously compelling storyline.

There are two keys to making this thing a success: Bray Wyatt can’t lose for a very long time unless it’s a justifiable finish that isn’t clean. His presence as a legitimate force in the WWE has to be rebuilt using wins, not losses. More importantly, us fans have to be guessing with this for just as long. The truth of Abigail can’t be unveiled for at least one year, minimum. We need to be asking if she is real or not. We need to be wondering if Bray Wyatt actually has some sort of split personality disorder that is finally surfacing after all this time when he’s at his most vulnerable. For the next year, WWE needs to juggle these notions and play on our curiosity. As soon as they make us think one way, they need to throw a curveball that makes us question everything we’d previously thought we knew. WWE needs to reach into their bag of tricks consistently using vignettes, confrontations and events that take place at the Wyatt compound and other darker places we’ve yet to discover, backstage mind games and even creepier happenings within the squared circle and, most importantly, constantly feed us little bits and insights into the history and origin of both Wyatt and his “sister” that leads to a shocking climax. This is very simple and isn’t any tool or technique that hasn’t been done before. WWE obviously didn’t want to use the Undertaker blueprint with Wyatt but they absolutely cannot abandon the storytelling blueprint. The mystery of Sister Abigail is one that belongs in the annals of the greatest wrestling angles years from now!