By Brandon Stransky Wow, it’s been a minute since I’ve done one of these. Hello everyone, you might recognize me as the host of AlternaTV as well as co-host of […]

Wow, it’s been a minute since I’ve done one of these. Hello everyone, you might recognize me as the host of AlternaTV as well as co-host of Hambone and The Alternative Watch Trailer Park Boys. I’ve recently decided to go back to what I first started doing when I became a contributor here at Russosbrand and start writing for the site. This will be a new weekly column I’ll be doing where I give my thoughts on what’s happened during the week in all forms of entertainment and news.

-The NFL Draft: I still don’t care about football especially after the NFL gave St. Louis the middle finger a couple of years ago.

-Not as much in to hockey as I was back in the day but would be really neat to see the Golden Knights go all the way their first year. 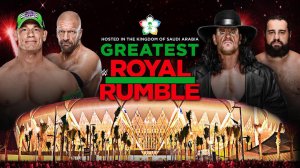 -Alexa Bliss breast implants: I guess it’s the libertarian part of me that makes me wonder why people are so up in arms about her doing this. If it was her decision that she made on her own without being pressured, I don’t see what the big deal is, that’s her business.

-That Saudi Arabia vs. Iran angle they did at GRR: They are aware that they could legit get people killed or start riots over that right? Not all crowds are like American, Canadian, or British ones.

-I wonder what Lesnar has over Vince to have the belt this long and not appear as little as he does on the show while making as much money as he does.

-I’m starting to dig heel Nakamura(probably cause he’s one of the few heels allowed to actually get heat) although AJ is looking incredibly dumb for not wearing a cup whenever he goes out now.

-The first conviction in the #metoo movement has finally been handing down as Bill Cosby was found guilty in the 3 counts against him that hadn’t had their statute of limitations expire. Hopefully this leads to more people speaking out and coming forward now that they’ve seen justice be served.

-North and South Korea look like they may actually indeed achieve peace after all. I know there have been times things have come close before but now we’re having first time instances such as Kim coming over to the South, or the two leaders now having  a direct link to each other that makes me think that something may indeed come of this and we can only hope and pray this continues to develop positively.

-On that note, it’s no secret I’m not a Trump fan, I’m of the belief that he is a threat to freedom, liberty, and the Constitution. However, I will say this, if he manages to help pull this off with North Korea and does something that no other president has been able to do and achieve peace with that nation and you can’t put him over for it, then I’m sorry, you’re 100 percent biased and have zero credibility.

And unfortunately that’s all I’ve got this week although I promise to have more for next time. Thanks for reading and I’ll see you all next week.

Posted on May 1, 2018 By Brandon Stransky Blogs Posted in Blogs