As television viewers, would we tune into a dramatic series week, after week, if the events building that series remained in neutral every, single week? If Game of Thrones, or […]

As television viewers, would we tune into a dramatic series week, after week, if the events building that series remained in neutral every, single week? If Game of Thrones, or The Walking Dead were the exact same shows, episode, after episode and the stories never progressed . . . would we continue to watch it? If characters didn’t develop and storylines didn’t move—what would be the purpose of watching any show?

That has been RAW in a nutshell pretty much throughout this entire WrestleMania season—week, after week nothing BUILDS. Everything has remained in a “holding pattern”, nothing—AT ALL—is evolving to peak our interest. It seems as if episode, after episode, Vince McMahon is playing a wasteful game of tit-4-tat, with nothing going anywhere. Jericho gets the best of AJ, AJ get the best of Jericho, New Day goes over Nation, Nation goes over New Day, Hunter and Roman brawl, Stephanie throws Reigns out of her ring. It’s just drudgery, man, boring, nonsensical drudgery. As I sit back and watch this show—only because I get paid to–it’s getting to the point that I can’t even believe the lack of creativity I’m witnessing. How can NOTHING happen over a span of three hours? And to think, Vince McMahon was my “great filter”? Who’s filtering him these days—my 10th grade English Lit teacher—who was about as exciting as the William Shakespeare novel he was shoving down our throats—that none of us CARED ABOUT!!! 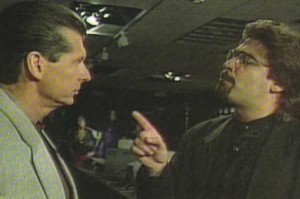 There was so many opportunities last night to make something happen—ANY FREAKIN’ THING! Reigns could have knocked Triple H out in the parking garage and taken off with Stephanie still in the car. Paul Heyman could have confronted Mick Foley about handing off his trademarked barb-wired bat to Dean Ambrose the week prior. Ambrose could have gotten to Heyman—with Lesnar nowhere in site. It’s no freakin’ wonder that Stephanie and Trips tried to get outta that place an hour before the show ended—I would have tried to beat the traffic too!!!!

You know, during the course of the show I tweeted out a comment putting over the video packages that the WWE television studio had produced in doing a great job in telling the Shane-O-Mac/Taker story. A minute later, my old friend Road Dogg tweeted something to the effect of, “Be careful putting us over, Vince, you may lose your following.” You know what, with all due respect to Road Dogg—I REFUSE TO PUT OVER ABSOLUTE CRAP. Give me something to put over and I’ll gladly do it. New Day talking about Rusev’s feet—no thank you—you can have the honor of praising that “masterpiece.”

If you guys have one shred of pride in your entire beings—you’ve got to try harder and get better.